What can you do to improve a car as good as the Alpine A110? Because it already has a reputation as one of the most driver-focused, everyday-use spo...

What can you do to improve a car as good as the Alpine A110? Because it already has a reputation as one of the most driver-focused, everyday-use sports cars in its segment. However, the new Alpine A110R it takes the art of laying out the twistiest roads even more seriously thanks to a more radical set-up.

Let’s address weight reduction first, because this is a Lotus-like obsession, where keeping mass as low as possible is part of the Alpine philosophy. The A110 S is already a “featherweight” compared to a Porsche 718 Cayman, weighing in at 1,116kg, but Alpine has been able to shave an extra 34kg off that figure. That means that the A110 R marks on the scale 1,082kg. A Mazda MX-5 is only 30kg lighter and half the power at worst. A Lotus Emira is 248 kg heavier.

The secret ingredient that helps make the French two-seater so light is, as you guessed it, the carbon fiber, which is widely used. A carbon bonnet (redesigned to add a pair of air intakes) saves 2.9kg, and the set of carbon wheels, which, interestingly, sport an open-front design to aid cooling, and a more of disc at the rear to reduce drag, are responsible for 12.5 kg in total weight savings, especially as regards inertia.

The seats buquetsabelt In one piece, made of carbon fiber and equipped with the six-point harnesses, they contribute 5kg of weight reduction, and although Alpine does not mention a weight figure for the carbon rear window (which is no longer a window like result), it is arguably the most striking visual feature of the entire vehicle.

Some of the carbon fiber additions are specifically designed to improve high-speed downforce, including a wider diffuser in conjunction with a set of wider winglets (which help reduce aerodynamic turbulence and is aided by hoods on the rear suspension arms) and some side skirts that extend to the width of the ground. For his part, the spoiler (a repositioned and sprung version of the A110 S’s wing) adds 29kg of downforceand the additional air intakes another 14 kg.

As we have already said at the beginning, the power unit remains unchanged. The unit of 1.8 liters turbocharged four-cylinder 300 hp and 340 Nm remains intact, but with the improvements applied to the body and chassis, reaches a top speed is 285 km/h compared to the 275 km/h of the A110 S with which it shares the engine and technical data. Reducing a car’s weight doesn’t have big implications for its top speed, so the improvement can be attributed to a 5% reduction in drag. 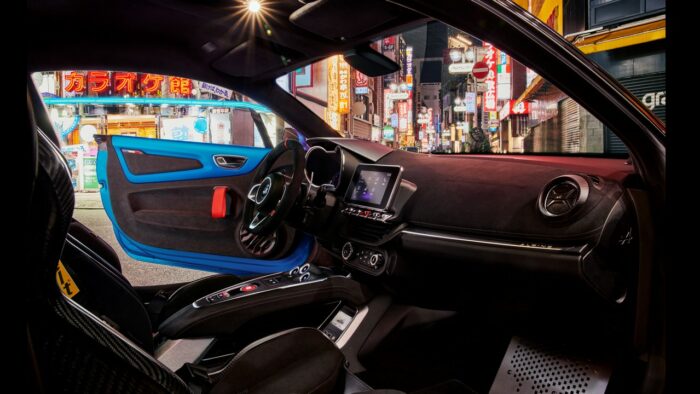 And while the internals of the engine are the same, the sound it generates is vastly different, Alpine promises, thanks to a new exhaust system that features double-walled pipes and no exhaust valve. Also should sound subjectively louder because Alpine has reduced some of the soundproofing and has replaced the glass window that separates the cabin from the engine compartment with an aluminum panel.

Much of the A110 R’s track and cross-country performance advantage over the A110 S comes not from weight and aerodynamic advantages, but from what Alpine has been able to tweak in the wheel arches. It is 10mm lower than the A110 S, and has 10 and 25% stiffer anti-roll bars front and rear, respectively. The springs are 10% stiffer at both ends, while the dampers can be manually adjusted through 20 different settings depending on the conditions.

Aesthetically, the Alpine A110 R gets its own color, Racing Mat Bluewhich it shares with the Formula 1 car, while, within the great clues to the new identity, in addition to the carbon fiber wheels and the total lack of rear visibility, we find the microfiber door handles that cover almost all interior areas, as well as the Elimination of any superfluous element. It has to be great, right? The A110 has proven to be a focused sports car as other renowned manufacturers have been.

The good news is that you can already place orders for the Alpine A110 R. The bad news is that it will arrive in Spain in a very limited number of units. Also that your starting price is 107,000 euros, a significant difference compared to the 75,800 euros that the A110 S costs or the 63,200 euros of the basic one. The first deliveries are scheduled for spring 2023.

Volkswagen ID.5 Pro Performance | Test | Opinions
The Hyundai IONIQ 6 was selected as first in its category.
BMW M3 CS 2023, not so personal, but a lot of fun
Pagani Huayra Codalunga, this is the second of the 5 that will be
Bentley celebrates the R-Continental with a unique edition
BMW M3 CS 2023: passion in saloon format

BEĞEN
TAKİP ET
All the sedans, hatchbacks and coupes arriving in Mexico in 2023
Orlando City, Soccer Club
Will Ferrari be able to compete like this against Red Bull and Mercedes? The “joke” that cools the options of Carlos Sainz and Charles Leclerc
The decision that could change everything for Carlos Sainz: “When I was at Sauber…”
Porsche Vision 357, pays homage to the 356 celebrating 75 years of history
Alfa Romeo confirms they're working on a new EV